There are two Primary Schools which serve the Parish, St Clare's and St Brendan's.  Links to our Schools are below: 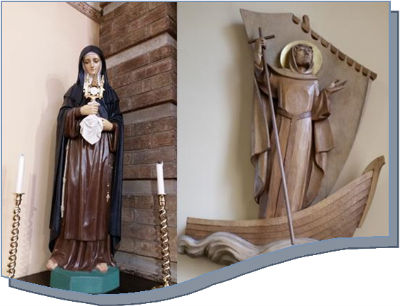 St Clare and St Brendan, pray for us!

The Catholic Secondary School and Sixth Form which serves Bradford is:

SBSJCC is a recently established co-educational school, founded by the merger of the two single sex Catholic secondary schools in the city of Bradford; the boys school St Bede’s Catholic Grammar School in Heaton and the girls school St Joseph’s Catholic College in Manningham.

The college opened in September 2014 and welcomed its new intake of 290 Year 7 students which increased the total of students in the college to over 2000, including over 400 in the 6th form St Benedict’s. This cohort is now in Year 9 and have been joined by two other mixed cohorts numbering 580 in total.

Students who were attending either of the old schools prior to the merger will remain in single sex education at the site they previously attended until they finish in Year 11 and will continue to wear the old school uniform. The college will be fully coeducational by 2018.

The college operates across the two former sites which are approximately one mile apart with the aim of eventually housing Key Stage 3 at the former St Joseph’s site (Ignis) and the Key Stage 4 and 5 students at the former St Bede’s site (Ardor).

The college community lives out this motto through the concepts of Ignite, Illuminate and Shine. It is around these themes that the college development plan is based.